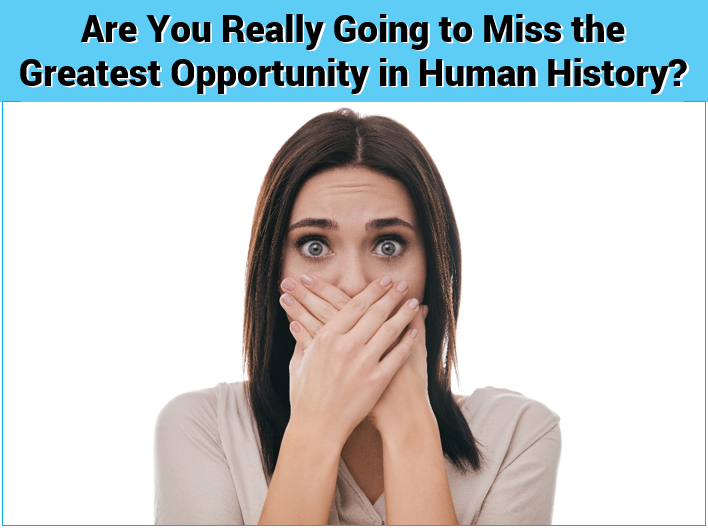 Yep. You read that headline right.  And I’ll grant ya, I’m kinda gettin’ in your face a little bit there. But I wrote it because I’m concerned about you.

And I’m concerned because I fear it could be a possibility. Because I just can’t shake the feeling that you, your buddies, your bro-hammers, BFFs and BAEs To The Maxes are just sailing along without any clue that we are all living smack dab in the middle of (takes breath):

The Greatest Opportunity in Human History.

What I’m talking about, of course, is the heretofore unprecedented opportunity to actually create your own frickin’ destiny.

Let me repeat that in case you missed it.

Now, you really ought to take a moment to process that truth. No, seriously, take it. I’ll wait. Because it’s a truth so important, so all around us – and so freakishly obvious – that I’m afraid you might miss it. And if you’ve been sitting back and waiting for that perfect, shiny moment to start a business, strike out on your own or otherwise start creating the life you actually want to live, well guess what:

You can stop waiting.

For that moment has arrived.

And you really should be jumping all over it.

Because, you see, it hasn’t always been this way. In fact, far from it. Indeed, throughout almost all human history, the average individual’s ability to exert even the tiniest amount of influence over the life they were forced to lead has been roughly equivalent to jack-squat.

Not that it was our ancestors’ fault, of course. Initially, they tended to focus on, oh, how shall I put it: a different set of deliverables. Like, for example, remaining alive from one moment to the next.

Hell, for most of pre-civilization, your average Igg and Ugg spent their days eating dirt off of rocks, shivering in caves and sprinting like hell from the local saber-toothed monstrosities. And those were considered “the good times.”

So when this whole civilization concept became a thing, it was no surprise that people jumped on it. But, while circumstances did improve a little, the truth was that most people were still pretty much condemned to live out their lives in the same filthy, plague-infested hellhole into which they had been born. With about as much control over their destiny as they did over the rotation of the Earth.

And that level of control remained pretty non-existent as we schlepped through the millennia from fiefdoms to fields to farms and then factories, before finally arriving at that very pinnacle of all human accomplishments, the humongous multi-national corporation.

While working for them was admittedly something of an upgrade over rank serfitude, you still didn’t have much control. You still had to live wherever the corporation was located, show up exactly when they told you to, put on some ridiculous monkey suit and do whatever they decided you were qualified for. And for a while, it looked like those massive conglomerates would go on determining your fate forever.

But a funny thing happened on the way to eternity.

Almost unwittily loosing one hell of a torpedo straight into the heart of the Big Box, multi-national, cubicle-farm status quo.

And it wasn’t long before things began to change.  Suddenly the big boys were no longer invulnerable because they were so big. Indeed, many became exceedingly vulnerable for that very reason. Software began eating the world, disrupting whole industries and changing the game like never before

Making individual humans like you and me exponentially more powerful than ever before.

Giving us the ability to compete. The ability to scale. The ability to take on – and maybe even take down – such previously unassailable global behemoths like GE, Exxon Mobil or Bud Light Clamato. In fact, it is already being postulated by a whole bunch of, you know, postulators – that it is only a matter of time before we see the first single-person billion dollar company.

That’s not as crazy – nor as far away – as you might think. When Instagram was purchased by Facebook for a cool billion, they had a total staff of thirteen.

And it’s only the beginning.  If the last coupla centuries could be called the Age of the Institution, then perhaps we are now entering the Age of the Individual. Disrupting the giants, leveling the playing fields and reducing the barriers to entry. And sending all of the traditional gatekeepers packing.

Or, at least, almost all of them.

For there still remains one. And they are without a doubt the most difficult to impress and the hardest to get around. Which brings us back to you.  And whether you’re going to miss out on this pristine opportunity or not.   Because if you’re like most people, the person most likely to stop you these days…

Yes, my friend. You are the last gate-keeper.

Don’t feel bad. I totally get it. There are a billion reasons not to. You’re too old to start. Or too young to start. Or the perfectly terrible combination of both at the exact same time to start.

Not to mention the fact that there’s always an inexhaustible supply of people who will be more than happy to tell you that you’ll fail – and that they’ll be there to laugh in your face when you do. They’ll tell you that you’re stupid.  That this article is stupid. That I’m stupid. Well, okay, they may have a point on that last one.

If it helps, you can take comfort in the fact that most people won’t even bother. They’ll ignore this message. They won’t get it. Or maybe they will – but they still won’t try. They’ll say it’s too hard, too risky or too far outside their comfort zone. They’ll talk themselves right out of it. Right before they turn around and try to talk you out of it, too.

For, to paraphrase Craig Ballentyne from one of my favorite publications, Early to Rise, starting isn’t the key to winning.

Do it for your dreams. Do it for Igg. Do it for Ugg. Do it for the billions of humans who never even had a whiff of the opportunity which now stretches before you.

Walk up to a mirror. Stand up to that last gatekeeper. Set your jaw, gird your loins, summon your willpower, do whatever it takes.

Because the time has arrived. And life really is too short.

And the greatest opportunity in human history is awaiting.

B. T. Lyng is a writer, speaker and unapologetic liker of the global startup revolution.

Founder of the Content Marketing agency, Lyng & Associates, he has been lucky to help 130 firms crush sales records, raise millions in funding – and even come back from the dead (it’s true).  Oh yeah, and he also serves as guest lecturer for the University of Southern California’s Lloyd Grief School for entrepreneurial studies – and is a contributor to Success.com.